Today the market demands have transformed drastically, especially in the case of the online market. You require Android & iOS apps which are the main platforms right now. So, if you are running a business then you require to develop the same application writing different codes for both the platforms. However, isn’t it much of a task to write the same code in different ways? Not just it is time-consuming but quite troubling as well.

Due to this reason, a cross-platform mobile app development is quite prevalent these days and it has gained a lot of prominence in the mobile industry lately. Not just it is time-saving, money-saving, but it also saves your marketing budget. In the past few years, several platforms arrived in this arena and they changed things in the field of app development. Like, there are tools like Facebook’s React Native, Microsoft’s Xamarin, and Adobe’s PhoneGap. They all come with their respective pros and cons. 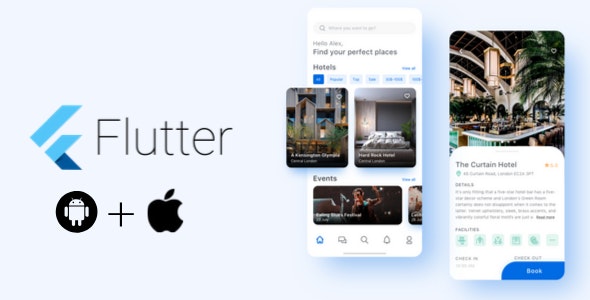 Flutter is a free & open-source framework useful to build native mobile application on Android and iOS from the same code base. Its beta version was introduced in 2017, while the full-product was launched in December 2018 at first Flutter Live Conference. Even though it’s a new tool in the market, still it has been adopted by the big names like Alibaba (one of the biggest B2B online markets) & Tencent (prominent Chinese internet-based group), where they have integrated this technology in their most significant products. Even Google uses Flutter in the Google Ads app and this framework is also the development platform for Google’s upcoming operating system, Fuschia.

How Does Flutter work?

Owing to its nature & capabilities, Flutter is not a framework but it is an SDK for the apps designed for touch screens. Though its main purpose is working on both Android and iOS devices, it can even run on the other platforms. The developers are required to be well-versed with Dart to create apps in Flutter.

When building native apps, it is quite an easy object-oriented programming language with various useful features.
Meanwhile, for the interface site, Skia is used by this framework by Google. Skia is an open-source 2D rendering engine and its set of components enables creating the UI in manner engines like Unity enable creating games. That is because this framework is mainly based on widgets. Everything in Flutter is a custom widget that is created to look natively both for Android (Material Design) and iOS (Cupertino) devices. Here the entire UI design is about combining these widgets, comprising of shapes, text, animation. Here, every aspect of the layout is determined, such as padding. Here, one can even create your own complex widgets from the simpler ones.

Also Read: Flutter vs. React Native vs. Ionic Which is better your App?

Flutter is great at creating seamless mobile apps and here’s how:

Very Fast Application Development: With the features such as Hot-reload, the code changes in Flutter are displayed as the alterations are done. Now, Hot-reload takes just milliseconds, and this allows the developers to maintain dynamicity & high speeds for mobile app development. Flutter widgets are useful to create native interfaces just within few minutes.

Apps run faster: The apps created on Flutter offer smooth & seamless scrolling experiences while in use, sans too many cuts or hangs.

Reactive Framework: As Flutter is a reactive framework, so here the developers don’t need updating the UI contents manually. After variables are updated, UI changes will be automatically visible.

Access Native Features: Setting up Flutter is very simple. Here the app developers can easily access native features of low-level machines where Flutter is used. With it being cross-platform in nature, so the codes which are written in the existing Java, Swift, Objective-C, etc. can be easily reused time and again.

Lesser efforts required for Testing: With the Flutter apps being cross-platform, it is not always necessary for the testers to run the same sets of tests on the different platforms, like Android & iOS, for the same application. With the cross-platform app development, apps can be run on multiple platforms by writing programming code just once. Hence, it is less time-consuming for the testing team. This is the reason that most developers prefer Flutter, for faster apps testing, apps delivery, and apps deployment.

Despite Flutter being appreciated widely for its many appealing features, still it is not as enhanced as the naïve development and here we have discussed a few of its disadvantages.Limited Libraries: In Flutter, the libraries that can be accessed by mobile app developers are too limited and they don’t always offer all functionalities required by the developer. Thus the app developers have to develop these functionalities on their own.

Final Note: With Flutter, Google aims to pave its way to the future of cross-platform development. Often it is seen that developers are made to compromise between quality and productivity. Often they have to choose separate applications development for Android and iOS or are required turning to a cross-platform solution that fails at delivering native experiences. Now with Flutter, they aim to bridge this gap, as it focuses on the complex visuals, productivity, and native performance. Also, Flutter is efficient to deliver a unique experience, reduce time & effort needed to spend and also mitigates the risk of errors. Thus, the future seems very bright with Flutter.